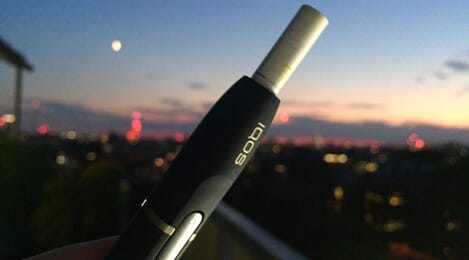 On 11 June 2018, I bought an iQOS to try to replace cigarettes for something else. I tried e-cigarettes and then vapes first, but couldn’t get used to them and found they made me suck too much or had me coughing more than regular cigarettes did… so moved onto the nicotine inhaler and gum, which filled in gaps but never fully replaced cigs… as the missing tastes and different buzz of the gum was a bit trippy. The inhaler grew on me, but I found I could not resist the occasional cigarette, even with it. So I bought iQOS, and it’s been about 20 days since then, and it is going well for me so far.

Loving the turquoise (peppermint flavoured) Heets. They are kinda strangely tasty. I don’t like menthol cigarettes, so liking the Turquoise Heets is a bit of a surprise.

At first the flavour I went for and liked was based on Marlboro Gold/Lights. But after trying those along with Turquoise Peppermint ones, I now prefer Peppermint. When I want the taste of real fags, the Amber ones (which are meant to replicate Marlboro Reds, I think) are my current choice.

There are moments when I am recharging the Heets stick and waiting to have another, when I feel I have to exercise a bit of restraint. But watching it charge and chilling out for about 3 mins has been a bit of an oddly good experience. I start to notice the life going on around me more. The break outside for a fag/Heet then, feels a bit more of a break. Clears the mind more. A chain smoker looking to destress on a fag break, rarely slows down long enough to feel the calmness meant to be felt on a break like that. Now I do. But if the cravings persist to chain smoke, I might need to get another IQOS and rotate them quickly, inhale heets from one while the other charges back up. That seems excessive though. And so far, I have been able to not have any proper fags for weeks. And I am happy about that. What I like about all this too, is that afterwards, when I take a deep breathe… it feels good. Not like proper fags. Proper good. The Peppermint feels like it spreads all over. Perhaps too much. But all of the flavours, after having a Heet, leave my mouth and lungs feeling better and more capable of deep inhaling and deep breathing… when compared to smoking Marlboro’s.

Tags: iqos, smoking
← Digital Marketing Articles from around the web
My songs and tune drafts →