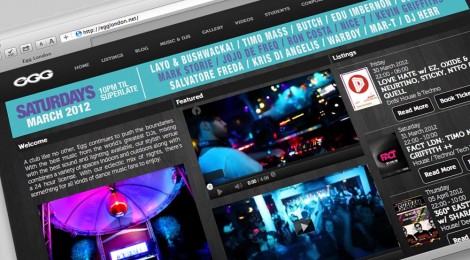 In 2009, the EggLondon.net went under a redesign… stripping out a clumsy and small window Flash based site in favour of bespoke content managed site in dynamic HTML, jQuery, automated event managers, music players, video players, galleries, slide-shows, ticketing systems integration, social network integration… and so much more.  And all in ways that work on iPhone and other smart phones.   In 2012, the site got a refreshed look, stylish embedded fonts, a larger screen layout and more bells and whistles!

The staff at the club maintain the site – pretty much entirely on their own, with only occasional support being required from yours truly.

A great portfolio piece, which was live for 4 years (from 2009-2013)… and a great demostration of some advanced flexible bespoke CMS creation.

Egg is a cool club, that needs a cool site. It was a pleasure to help them out for over 4 years!

More recently, in April 2013, their site was redesigned again – this time not by me (as I was no longer available for freelance work). Nice though, that they kept the basics of what was there from our original work on the project… and added a few new twists.